And let there be light 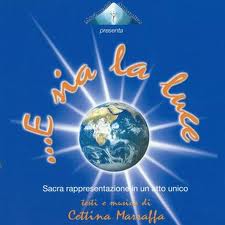 And let there be light

“And let there be light”, with music and lyrics by Cettina Marraffa, is a sacred representation realized in a single act, which portrays the themes of “creation” and “redemption”: the mystery of God and man, of death and life, which must be fully enveloped by the truth of Christ, the Light of the world, that came among us to lighten the Gentiles, with his eternal truth, wanting his every creature to “be light of the world and salt of the earth.”
The sacred representation, edited by the President of the Apostolic Movement, begins with the creation of the world, the appearance of light, the creation of man and the Lord’s command not to eat of the tree of knowledge of good and evil. Follow the temptation and sin of Adam and Eve and the return of creation in the darkness.
Then the Lord calls the hidden man to proclaim the great promise of the victory of good over evil, which would have taken place in the course of history through the seed of the woman: a promise that is fulfilled with the announcement of the Angel to the Virgin Mary, betrothed to a man named Joseph, chosen to be the Mother of the Saviour of the world.
At the end both the musical pieces and the scenes present the sweet hope characterized by peace, by the eternal security of the germ of the new life that God sows in every man. “And let there be light” is on sale in all Catholic bookstores.
The score contains in addition to the spoken parts, scores of songs and lyrics, also tips for the scenery, costumes and direction.

Musical play – under your shadow a song- GMG Madrid 2011