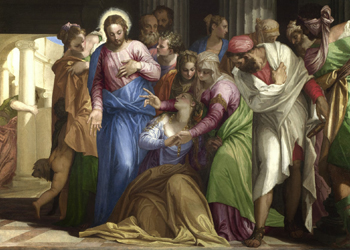 Let the children be fed first

God says: “I am the judge of the whole earth”. He reveals to Abraham his decision to destroy Sodom and Gomorrah. The prayer of Abraham reveals to the whole world that truly He is the Judge with the right judgment: “Will you sweep away the innocent with the guilty? Suppose there were fifty innocent people in the city; would you wipe out the place, rather than spare it for the sake of the fifty innocent people within it? Far be it from you to do such a thing, to make the innocent die with the guilty, so that the innocent and the guilty would be treated alike! Should not the judge of all the world act with justice?” The Lord replied, “If I find fifty innocent people in the city of Sodom, I will spare the whole place for their sake.” Still he went on, “Since I have thus dared to speak to my Lord, what if there are no more than twenty?” “I will not destroy it,” he answered, “for the sake of the twenty.” But he still persisted: “Please, let not my Lord grow angry if I speak up this last time. What if there are at least ten there?” “For the sake of those ten,” he replied, “I will not destroy it”” (Cf. Gen 18,23-32). Now the whole world knows that the Lord is a judge with just judgments.

God says: “To your descendants I will give this land”. Is the Lord able to keep his promises despite the sin of his people? Moses’ prayer reveals that the Lord keeps what he says: “I see how stiff-necked this people is,” continued the Lord to Moses. “Let me alone, then, that my wrath may blaze up against them to consume them. Then I will make of you a great nation.” But Moses implored the Lord, his God, saying, “Why, O Lord, should your wrath blaze up against your own people, whom you brought out of the land of Egypt with such great power and with so strong a hand? Why should the Egyptians say, ‘With evil intent he brought them out, that he might kill them in the mountains and exterminate them from the face of the earth’? Let your blazing wrath die down; relent in punishing your people. Remember your servants Abraham, Isaac and Israel, and how you swore to them by your own self, saying, ‘I will make your descendants as numerous as the stars in the sky; and all this land that I promised, I will give your descendants as their perpetual heritage.'” So the Lord relented in the punishment he had threatened to inflict on his people” (Ex 32,9-14). Now we know that the Lord is always faithful to his every Word. What He says he is capable of doing it, making it happen.

From that place he went off to the district of Tyre. He entered a house and wanted no one to know about it, but he could not escape notice. Soon a woman whose daughter had an unclean spirit heard about him. She came and fell at his feet. The woman was a Greek, a Syrophoenician by birth, and she begged him to drive the demon out of her daughter. He said to her, “Let the children be fed first. For it is not right to take the food of the children and throw it to the dogs.” She replied and said to him, “Lord, even the dogs under the table eat the children’s scraps.” Then he said to her, “For saying this, you may go. The demon has gone out of your daughter.” When the woman went home, she found the child lying in bed and the demon gone.

Jesus says: “But I say to you, love your enemies, and pray for those who persecute you, that you may be children of your heavenly Father, for he makes his sun rise on the bad and the good, and causes rain to fall on the just and the unjust“ (Mt 5,44-45). Loving means doing all the good that is in our possibilities. A foreign woman is presented to Jesus. Might Jesus ever do her the good she asked him to do? If he did not listen to her request, Jesus would certainly contradict himself. He would say one thing by doing another. The woman puts him at ease. She suggests him that he can make the grace for her, because she takes nothing away from his children and takes nothing away from strangers. A landlord who lets dogs feed on the crumbs that fall from his table takes nothing away from his children. Thus also Jesus, if he lets a single crumb fall so that her daughter may be healed, he takes nothing away from his children and does not even become disobedient to his Father. Here is the true purpose of this woman’s prayer: showing every man that Jesus does what he says, what he commands others, he lives it. Jesus is really, truly the mercy of God on our earth. Everyone can turn to Jesus. He always has crumbs of omnipotence, mercy, charity, compassion, hope and light with which he will give our life fullness of truth. He is the compassionate God who loves every man.

Mother of God, Angels and Saints, help us to always manifest the truth of Christ Jesus.