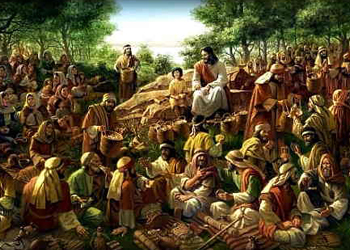 My heart is moved with pity for the crowd

God’s compassion is divine charity and truth offered to man so that he may be converted and live. It is the infinite patience of the heavenly Father who awaits the return of the son of his house. Not only does the Lord our God await our repentance, He also gives us the gift of all grace so that we can return to Him. Thus the Book of Wisdom: “For with you great strength abides always; who can resist the might of your arm? Indeed, before you the whole universe is as a grain from a balance, or a drop of morning dew come down upon the earth. But you have mercy on all, because you can do all things; and you overlook the sins of men that they may repent. For you love all things that are and loathe nothing that you have made; for what you hated, you would not have fashioned. And how could a thing remain, unless you willed it; or be preserved, had it not been called forth by you? But you spare all things, because they are yours, O Lord and lover of souls” (Wis 11,21-26). God does not want the death of the sinner, but that he is converted and lives.

The Letter to the Hebrews reveals that the compassion of Christ Jesus is just, true and holy. For compassion Jesus gives all of himself to the Father for our conversion, justification and eternal life: “Every high priest is taken from among men and made their representative before God, to offer gifts and sacrifices for sins. He is able to deal patiently with the ignorant and erring, for he himself is beset by weakness and so, for this reason, must make sin offerings for himself as well as for the people. No one takes this honor upon himself but only when called by God, just as Aaron was. In the same way, it was not Christ who glorified himself in becoming high priest, but rather the one who said to him: “You are my son; this day I have begotten you”; just as he says in another place: “You are a priest forever according to the order of Melchizedek.” In the days when he was in the flesh, he offered prayers and supplications with loud cries and tears to the one who was able to save him from death, and he was heard because of his reverence. Son though he was, he learned obedience from what he suffered; and when he was made perfect, he became the source of eternal salvation for all who obey him, declared by God high priest according to the order of Melchizedek” (Heb 5,1-10). The right compassion is in the gift of Christ Jesus. But it is also in the gift of man to Christ Jesus. If a man does not give himself to Christ, in conversion and faith to the Gospel, in obedience to the Word, the compassion of Jesus is made vain.

In those days when there again was a great crowd without anything to eat, he summoned the disciples and said, “My heart is moved with pity for the crowd, because they have been with me now for three days and have nothing to eat. If I send them away hungry to their homes, they will collapse on the way, and some of them have come a great distance.” His disciples answered him, “Where can anyone get enough bread to satisfy them here in this deserted place?” Still he asked them, “How many loaves do you have?” “Seven,” they replied. He ordered the crowd to sit down on the ground. Then, taking the seven loaves he gave thanks, broke them, and gave them to his disciples to distribute, and they distributed them to the crowd. They also had a few fish. He said the blessing over them and ordered them distributed also. They ate and were satisfied. They picked up the fragments left over – seven baskets. There were about four thousand people. He dismissed them and got into the boat with his disciples and came to the region of Dalmanutha.

Today there are many preachers of a vain, unjust, heretical and sinful compassion. That the world can live of false compassion, belongs to its un sanctified nature and not led by the Holy Spirit in the fullness of truth. No false compassion is allowed to the disciple of Jesus. He is the body of Christ and like Christ he must offer himself to the Father for the conversion of his brothers. It is the brother’s obligation to redeem and ransom his brother from every falsehood and lie and from every slavery of sin. The Christian’s just compassion is in the preaching of the Gospel of salvation, in the invitation to conversion and to faith. It is also in the gift of grace and eternal life. Either the disciple of Jesus lives and manifests the compassion of God and of Christ the Lord, or his compassion is false. He does not save himself and does not save the world.

Mother of God, Angels and Saints make us disciples with the just compassion of Christ Jesus.